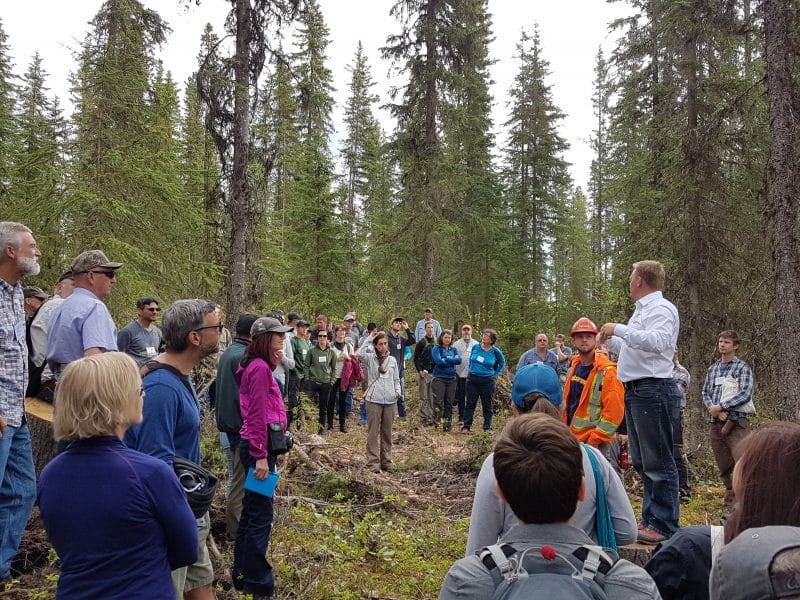 LINK TO THE CONFERENCE REPORT

LINK TO THE CONFERENCE PRESENTATIONS

The 14th annual event, hosted by the Burns Lake, Chinook and Cheslatta Community Forests brought together representatives from thirty community forests, First Nations, elected officials, the provincial government, forest professionals, researchers and students.  The over capacity crowd brought some challenges, but the hosts drew upon local resources and made everyone welcome and comfortable.

Day 1 began with a presentation from the three host communities on the background and story of their licences. With the days of the huge beetle kill salvage coming to an end, we heard about the strategies to manage for a long term sustainable harvest and for ecosystem restoration. We headed out to the Kager Lake Recreation Area and the site of the Burns Lake Community Forest partial harvest and hazard mitigation project.  We also went to the Chinook Community Forest to see what the land looks like when there is less than 5 tons per hectare remaining as a fire mitigation target. Let’s just say there was hardly a stick in sight.

On Day 2 we heard from Ministry of Forests, Lands Natural Resource Operations and Rural Development (MFLNRORD) staff on current initiatives including the 2017 Flood and Fire Review Report recently released. Kevin Kriese, ADM Regional Operations North, spoke to the new, modernized approach to Land Use Plans (LUP). The new approach will be specific and consider the particular issue that needs to be solved or what needs to be reflected differently in current LUPs. The new approach must also consider the changing dynamics of a changing climate, be data driven and include accumulative assessments. Processes will be co-designed with First Nations.

MFLNRORD Minister Doug Donaldson was the keynote speaker for Friday’s lunch, where he announced the Lower North Thompson Community Forest Society as the recipient 2018 Robin Hood Memorial Award for Excellence in Community Forestry. He also met with the BCCFA Board of Directors and Executive Director to discuss the next steps to move ahead on the BCCFA WUI Expansion Concept and agreed to further work exploring the costs and benefits of expansion.

Representatives from the Ministry of Indigenous Relations and Reconciliation (MIRR) , spoke about the new collaborative and innovative tone in the ministry and how Minister Scott Fraser has directed the staff to be open and to have discussions that were not previously on the table. Linda Robertson explained that MIRR is seeking to move beyond  legalistic approaches, focusing on transactions such as compensation for rights and title. The focus is on shared values and relationships that foster self-determination for First Nation Peoples and that we all can work to build relationships outside project transactions.

Casey Macauley, RPF concluded his presentation with the reflection, “People have long memories”. Important to keep in mind when entering the community with a resource extraction proposal: Where does your social license come from as a forester? Is it the AAC? Or is it the community and its presence and their need for support?”

The final session on day 3 of the conference was about fire. Brian McNaughton shared the very emotional experience and feelings of helplessness as an evacuee from the Williams Lake fires, and the deep impact on people (youth in particular). From under his RPF hat, he said that it is “time to rethink our management paradigm. Get deciduous trees back in the forests!”

Lori Daniels cautioned us, “Do not let the fires of 2017 be another wake up call. BC’s forests and communities are not resilient to wildfires and climate change. Transformative change is urgently needed.”

Stephan Martineau introduced the risk management approach they are using in the Slocan Valley fuel treatments. They asked: Were there some areas that burned more frequently? Were there fire movement paths in the landscape? They turned to fire behaviour modelling and have identified a landscape level plan for fuel mitigation that includes prescribed burns.

One conference participant commented about his experience, “Thank you very much for organizing and delivering last week’s event. I have never enjoyed one quite so much, nor found the content so useful, nor the friendships and contacts that developed from it so worthwhile.” Another said, “The conference was excellent, very relevant to what we are doing, and well organized and put together. Congrats on a job well done. I enjoyed networking and met a lot of interesting people. The presentations were all very good, I took a ton of notes. I noticed that in some presentations, you could hear a pin drop, everyone was paying such close attention!

We would like to thank the sponsors and all host volunteers for making the 2018 event so spectacular. The 2019 BCCFA Conference and AGM will be held in Mission in June, hosted by the Mission Municipal Forest.